Archive for the tag “human trafficking”

At the Justice Conference in Chicago on June 4, Russell Moore laid out what it looks like to be a Gospel-centered social justice warrior, tackling issues ranging from racial injustice, human trafficking, and refugees to the sanctity of unborn life, sexual ethics, and the reality of Hell.

Get your hands dirty, the way Jesus dirtied his hands for you

Johnnie Moore’s Dirty God is a book every young adult you know should read — and more than a few of us not-so-young adults too. 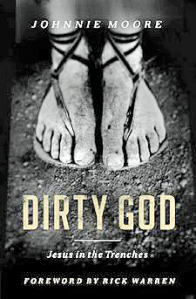 When you think about slavery or sex trafficking in these terms, it causes your stomach to turn over, and in the heart of someone motivated by grace, it should produce a compelling drive to do something about it.

Imagine, for instance, that same adorable eight-year-old niece went with her parents for a summer trip through Europe’s most glorious cities. She’s having the time of her life looking at the Duomo in the heart of Italy’s Renaissance city of Florence. She and her parents are looking straight up at the stunning architecture, observing the size and curvature of the building, the ancient decoration inscribed on its exterior, and how the folksy, old-world piazza hems the Duomo in. They feel that they’ve moved back in time to a simpler, more mythical era.

Just then her parents look down. Their daughter is nowhere in sight. They immediately snap into panic mode. Their pulses race, their eyes dart frantically in every direction, they call out her name, and then they scream it.

By the time they’re done frantically searching the growing crowd, after they have called upon the help of the local authorities, they suspect that their precious daughter is already in another place. What they don’t know is that she’s already in another city altogether, kidnapped by horrible people who intend to sell her to the highest bidder so he can act out his most satanic fantasies.

Imagine that that had been your fate, or the fate of your wife or sister or mother or best friend or the person you’re closest to. How would that make you feel? Does it not cause you to shudder?

We tend to shut out this kind of suffering, deny it, or put it out of our minds because there’s nothing we can do about it, so we might as well not even think about it. These scenarios are definitely downers, it’s true—but nevertheless, they ought to make our blood boil and our eyes tear up.

We should be more affected than we are by these things. And when we reach the appropriate level of outrage, we’ll actually do something about it—we’ll stand in the gap for those who need us the most, and get our hands dirty the way Jesus dirtied his hands for us.

Johnnie Moore is a 29-year-old vice president at Liberty University whose humanitarian whose work has taken him to more than two-dozen nations.

J.J. Gould makes a compelling case for calling “human trafficking” what it is: slavery. 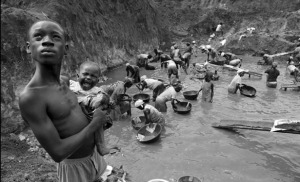 Slaves pan for gold in Accra, Ghana. Many have children with them as they wade in water poisoned by mercury that’s used in the extraction process. (CC Lisa Kristine NC)

RANGOON, Burma … Ma Moe, 34, and her husband lived in a suburb about an hour outside Rangoon, poor enough that on some days they had nothing to eat. A friend offered her a job as a domestic worker in China where, she was told, she could make between $100 and $200 a month. Despite her husband’s objections, she decided to go.

Near the border, her friend told her the trip would soon get rough and she should take some pills so as not to get carsick. The pills knocked her out almost immediately. When she came to, she was in a small village in China; she still doesn’t know where. Kept with a few other women in a small house, Ma Moe was then taken around to different villages where she was offered up for sale as a “wife.” After a failed escape attempt, when she was beaten by local police, a man from northern China bought her.

By now, having spent a month-and-a-half as a Burmese commodity on a Chinese black market, she could hardly eat from the stress and was emaciated. Her owner was concerned — he wanted a child — so he had Ma Moe’s blood tested; the results showed that she’s HIV-positive; and he ended up abandoning her at the bus station. With no hope of being able to get back to Burma, she prayed to die. But a young newspaper seller, fending off an attempt by another apparent trafficker to get Ma Moe to go with him, called a police hotline for trafficking victims. The police coordinated Ma Moe’s transfer to a Burmese anti-trafficking task force, and they ultimately took her home.

There’s a plain-language word for [such] horror stories … as anachronistic as it might sound: slavery. Contemporary slavery is real, and it’s terribly common — here in Burma, across Southeast Asia, and around the world.

… In the West, and particularly in the United States, slavery has long settled in the public imagination as being categorically a thing of the past.

One consequence of this is that when people apply the idea of slavery to current events, they tend to think of it as an analogy. That is, they tend to use the word to dramatize conditions that may be exploitive — e.g., terrible wages or toxic working environments — but that we’d never on their own call “slavery” if the kind of forced labor we used to call “slavery” still existed. “In 1994, when I was in the United Nations Working Group on Contemporary Forms of Slavery,” recalls [Kevin Bales of Free the Slaves], “a group came in and said they wanted the UN to declare incest a form of slavery. And we were like, incest is incest; you don’t have to call it slavery.”

But there’s an inverse consequence to seeing slavery as a thing of the past, too: It can mean having a harder time recognizing slavery when it’s right in front of us.

… The dominant rhetoric that the coalition of Christian conservatives and anti-prostitution feminists who took the lead on this issue used at the time wasn’t “slavery” but “trafficking for sexual exploitation.” Around the same time, a movement started against sweatshop labor that developed its focus not broadly on the issue of forced labor but narrowly on the conditions of the sweatshops themselves, sometimes even just on safety issues within them.

Luis CdeBaca, the U.S. ambassador at large to monitor and combat trafficking in persons, sees both of these frameworks as inhibiting and, intentionally or not, ways to feel too comfortable about addressing the issues in question. “If we say the problem with domestic servants is that they’re not covered by the Fair Labor Standards Act, and so let’s just go out and make sure they get covered by labor laws around the world, we get to ignore, for example, the fact that domestic servants are being locked in and raped. It’s not a wage issue; it’s a crime issue. If we look at prostitution and we devolve back to the old debates about whether prostitution should be legal and regulated, should it be illegal and criminalized, we won’t say, ‘… hey, why doesn’t the 13th Amendment apply to a woman in prostitution just as much as to a woman on a farm?’ Then we end up missing the reality of modern slavery.”