Construction, like many other industries in South Asia, promotes exploitation by virtue of apathy, custom, corruption, and greed. There is also a particular impunity built into the system of construction labor contracting that is especially effective at promoting trafficking and bondage.

After winning a bid for a project, major construction companies often subcontract the labor recruitment and management to jamadars. These are labor recruiters who offer advances to peasants across India in exchange for working on the project. Entire families can be recruited with the promise of good wages and conditions, but on arrival, the laborers can be severely exploited.

… “We are treated like cockroaches,” a laborer named Rashmi told me, “It is not just the jamadars—the government has betrayed the people. We are like dogs in the street scrounging for food and shelter. They promise us wages, but we have been here five months with no wages and barely enough food to eat. I feel no human dignity.”

Two sectors that feed directly into the construction sector – stones and bricks – are just as exploitative as construction. Millions of the most destitute peasants in South Asia are recruited each year into back-breaking work bashing stones or baking bricks to be used in construction projects.

With bricks, peasants work 14 or more hours a day in highly dangerous conditions baking bricks in a kiln that seethes at 1000+ degrees Celsius. The peasants often migrate to the kilns each year, perpetually seeking to pay off loans that almost always seem to grow.

When a bonded laborer named Gurahu attempted to flee from his insurmountable debts, the brick owner’s men tracked him down, punished him with electric shocks, and sold his daughter to a trafficker as punishment.

“I could not believe God had done this,” Gurahu told me. “I wanted to take my life. You cannot imagine how much pain I felt. I never saw my daughter again.”

Siddharth Kara is the author of Bonded Labor: Tackling the System of Slavery in South Asia

Horrific use of child soldiers rising in Colombia 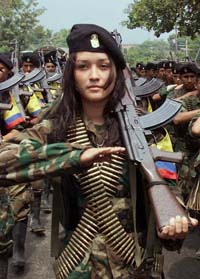 Sara Morales is in her early 20s, but already, she says, she’s been to hell and back. The Colombian woman who lives in Bogota says she was forcibly recruited by the main guerrilla group in her country when she was just a young girl.

“When I was only 11 years-old I was raped by FARC guerrillas and for 11 years I was abused and exploited by them,” Morales said.

FARC is a Spanish acronym for the Revolutionary Armed Forces of Colombia, a leftist guerrilla group that has been at war with the Colombian government for about five decades.

… A recent study suggests that in the years after the video was released, armed groups, including paramilitaries, guerrillas and drug cartels, have not only continued recruiting children, but have increased the number of minors in their ranks in a dramatic way.

The study called “Like Lambs Among Wolves” was authored by Natalia Springer, the dean of the law school at Universidad Jorge Tadeo Lozano in Bogota, Colombia. Springer, who’s also a political analyst and a human rights activist, has found that in the last four years, 18,000 children have been forced to join guerrilla groups and paramilitaries in Colombia.

… The findings of her study are chilling. Springer says she found 69 percent of those captured are 14 years of age or younger, some as young as eight. Ninety-eight percent reported they were abused or witnessed atrocities.

Springer also says that guerrilla groups recruit children to do “their dirty work” which includes extremely dangerous activities in which their lives are constantly at risk. “They’re installing land mines, they’re transporting explosives, they’re kidnapping, they’re involved in all of the activities that the adults are doing,” Springer said.

Springer says her team noticed what she calls an alarming new trend. Whereas in the past the vast majority of the children captured by the armed groups were boys, the percentage of kidnapped girls has dramatically increased to 43 percent. In addition to combat activities, Springer says these girls are subjected to sexual servitude. 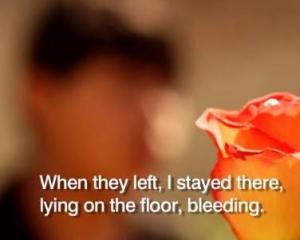 They were only 14 years old, cousins from a small town in central Mexico, when a fun trip to the local fair turned into a nightmare of drugs and forced prostitution.

As Maria and Lupe – CNN has changed their names to protect their identities – were waiting by the highway for their early evening bus home when they say a semi-tractor trailer stopped right in front of them and two men got out.

There were no conversations. It all happened, very quickly, the cousins say. “They were two men who were wearing black masks like hoodies. We couldn’t see their faces,” Maria said.

Lupe says she didn’t even have time to react. “I only felt that they put something on my nose and that’s all I remember. The last thing I remember is yelling for help,” Lupe said.

Drugged and drifting in and out of consciousness, they lost track of time. They only know they woke up in a dark room where they were kept for several days. There was no food or water and the cousins were cold. But it was only the start of their ordeal.

Several days later, Maria says, a woman showed up. She let them both know that, from now on, they were going to “work for her,” the cousins said. At that moment they had no idea what the stranger was talking about.

Lupe was taken out of the room and Maria was left alone with the woman. A man then entered the room and started beating her savagely. She says he raped her; and then both the man and the woman threatened her life and told her to cooperate.

That night Maria says she was forced to have sex with 23 men. “When they left, I stayed there, lying on the floor, bleeding. My entire body ached. The woman told me to get up, that it hadn’t been that bad,” Maria said.

To read about Maria’s daring escape and how it led to a clampdown on a massive criminal network, click here.