‘And they were not afraid to die’ 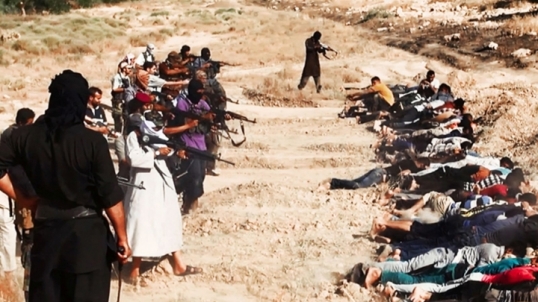 My mind focused in prayer this morning on the Christians in Iraq and Syria who have been suffering at the hands of infidels — evil, ruthless men who blaspheme the name of Abraham’s God by brutalitizing innocents. My heart breaks for every woman and girl kidnapped to serve as slaves to these wicked men. My anger burns for men and boys executed simply because they maintain a Christian home. I am devastated for families who have had to abandon all their worldly possessions and flee for their lives to places where they will have no way to provide for themselves. I grieve for Christians who live under this fascist perversion of Islam, afraid to publicly acknowledge their Lord. I am filled with pride for Christians who have refused to deny Jesus and met bravely death with his peace in their hearts.

In John 16:33, Jesus warned his disciples, “In the world you have tribulation.” The Greek word translated there is thlipsis, and it means “pressure.” Metaphorically, it refers to oppression, affliction, and distress. For some, the word ‘tribulation’ evokes a “Late, Great Planet Earth” scenario of Christians suddenly disappearing before the end-times tribulation begins. These believers can tell you their hope is not for a pre-tribulation rapture; it’s  too late for that. Their hope wells up from the second half of John 16:33, where Jesus says, “Take courage; I have overcome the world.”

‘Overcome’ translates nikao, a verb that means “to come off victorious.” When I think of the overcoming Jesus, I see a determined Messiah enduring death by torture — and a exuberant Christ stepping out of his tomb into the dawning light of that first Resurrection Sunday.

Of Christians, the Bible uses that word to describe those who resist pressure to deny Jesus, standing firm in their faith, even unto death. They are the ones praised in Revelation 12:10-11 as “our brothers and sisters” who overcame the Accuser “because of the blood of the Lamb and because of their testimony — and they were not afraid to die.”

An anti-Christian tide certainly is rising in the West, but none of us has yet faced a situation like the Assyrian Christians of Mosul, Iraq, who were told by ISIS thugs that they must convert to Islam, or begin paying the jizya tax, or die. When one poor man said he could not pay, the jackboots raped his wife and daughter in front of him. (AINA News)

Hebrews 12 reminds Western Christians that we have not yet given our lives in our struggle against sin. It exhorts us to think about all Christ endured when sinful people did terrible things to him — “so that you don’t become weary and give up.”

Christians in the Middle East are living Romans 8: They are experiencing trouble and calamity. They are persecuted, hungry, cold, in danger, and threatened with death. For Jesus’ sake, they are being killed every day, slaughtered like sheep.

Pray that the Comforter would visit each one and that the Lord would remind them that nothing can ever separate them from Christ’s love — not the powers of hell or even death itself. Ask God to keep before them the promises for overcomers found in Revelation 2 and 3: They will will eat from the tree of life in the paradise of God. They will not be hurt by the second death. Jesus will give them authority over all the nations. They will be clothed in white and their names never erased from the Book of Life. Jesus will announce before the Father and his angels that they are his. They will be invited to sit with Jesus on his throne.

Though the pressure you face today does not begin to compare with the pressure these brothers and sisters face, the pressure is real and it is yours. Remember that “every child of God defeats this evil world by trusting Christ to give the victory. And the ones who win this battle against the world are the ones who believe that Jesus is the Son of God.” (1 John 5:4-5 NLT’96) Stand firm on the truth that “despite all these things, overwhelming victory is ours through Christ, who loved us.” (Romans 8:37 NLT’96)

You can make a difference
Rep. Frank Wolf is speaking up in the halls of power for these powerless one. Encourage him.
Learn more about the persecution of Christians at the ERLC website and in our archives.
Help Baptist Global Response provide survival supplies for refugees driven out by the Middle East crisis.

One thought on “‘And they were not afraid to die’”