A large serving of dignity 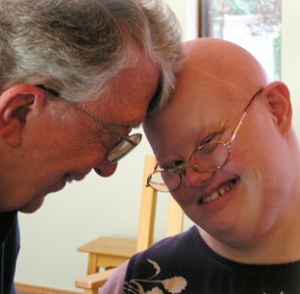 Mark Davis writes, in this 2012 article for The Atlanta Journal-Constitution, about L’Arche, a home where people with developmental disabilities live full time with folks who have none:

The chicken, big chunks of white meat, went first. It popped and sizzled in hot olive oil. Sara Ellet reached for an onion the size of a baseball. A knife flashed and, moments later, the onion was cooking, too. The air filled with the aroma of good things.

John Hudson, bouncing on his feet with impatience, stood at her side. Is anything better than white Texas chili on a cold afternoon?

For Ellet and Hudson, 28 and 30 respectively, their shared moment at the stove was another small declaration of mutual respect: One encourages the other.

They’re residents of L’Arche Atlanta, where people with developmental disabilities live full time with folks who have none. The house, which opened last month in Decatur’s Oakhurst community and is the only L’Arche home in Georgia, has six occupants. That sum is equally comprised by “core residents” — those needing help in their daily lives — and “assistants” who’ve signed up to spend at least a year living with them.

Bridges and Moore, like Ellet, are assistants, paid small annual salaries to live inside the thick-plaster walls of the L’Arche home. Bridges is the home’s coordinator, making sure schedules are kept, budgets followed. They’re all drivers, appointment-makers, confidants, friends.

Hudson, Hochschild and Swenson are core residents. Each has mental or physical disabilities and needs help in daily life.

So far, said Bridges, the arrangement is living up to the L’Arche principle that people, no matter their handicap, should be treated with dignity in an environment that stresses the spiritual aspects of life.

“This is a way to live in the world that’s hopefully a little more gentle,” said Bridges, 28, who has a master’s degree in divinity and is a deacon in the United Methodist Church.

L’Arche is French for “the ark,” a reference to the floating refuge Noah created at God’s command. It began in 1964 when Frenchman Jean Vanier opened his home to two developmentally disabled adults. He had no grand plan. Vanier simply believed people of differing physical and mental abilities could live together, respecting the capabilities of one another.

“To work for community,” he later wrote, “is to work for humanity.”